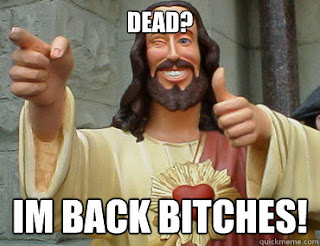 You may have noticed my blog has been silent for a while and you probably thought I was dead.  Well I very nearly was!  I got a horrible Migraine that was unrelenting. It lasted a day... then a month...then five months then a year.   The word Tumor was throw around by my doctors.  Every day of my life was agonizing pain.  I fell into a suicide depression. I almost lost my job and my life.   Luckily with the help of Web MD I was able to correctly diagnose myself with Cluster Headache also knows as "suicide Headaches".  Can you guess why?

Luckily the treatment is working.  My eye sight has returned and I am ready to take on life again.  Much like our fabled father I have raisin.

Once I found myself healed I decided  to focus on writing my play. About 2 years ago I embarked on making this blog into a play.  I spent over 1,000 hours writing this show.  I produced it with a local theater company and played the lead role bases on myself.  This was a life goal to take my story and put it on a platform everyone could enjoy.  The show ran for a month and sold out most nights.  It is the most important thing I have ever done.  You can watch the recording HERE.

So now I'm really back to give my Blog an ending.  So so much has happened.  So much healing.  I will be rewinding the clock to fill in the blanks.

The most interesting development was that of a man I thought I hated...

Something happened and only one person would have the info I needed...my Mormon Ex-boyfriend.  A man who I have resented for about 3 years.  I have called him a lot of names on this blog but now I will call him Ron.  Ron was the guy I moved out to Utah for in a desperate attempt to find eternal bliss. Like many 26 year old single Mormons I sadly made my trek to the breeding ground.  If I didn't marry Ron I was going to find another Mormon to marry. I had too. My Mormon life depended on it.

The thing I hated most about Ron was that he saw through my bull shit. He called me out for swearing.  He judged me for not serving a mission or wanting too.  When he dumped me he told me it was in part because he worried I might drink Alcohol someday.  I was not living up to the churches standard for me and deep down I liked it that way.

When I unblocked Ron on Facebook I was expecting to see him in a white shirt and tie. I pictured him standing by his lovely Mormon wife holding their lovely new born baby. I imagined his page riddled with Elder Bednar quotes.  What I was not expecting to see was Ron wearing ladies makeup covered in rainbows with purple hair. Turns out my Mormon-Ex is now an Ex-Mormon.  All these years I resented Ron because he got to live the Mormon life. I loved being Mormon. The choice to leave I felt was forced on me. The "shit or get off the pot" mentality. Either get married and be Mormon, or question everything.

Reconnecting with Ron helped me let go of the jealously. The frustration that I could not blindly kneel at the alter and let the prophet tell me everything I need. Apparently Ron and I were both fighting the same fight.  Ron now live in Portland Oregon and is exploring who SHE is. Thats right, Ron is a she.  She is a pan sexual lesbian.   She luckily married a beautiful woman who saw through the bull shit and they left together. Ron is now one of my favorite people to talk to when the church pisses me off. She is a really great gal.  My anger toward the church was made into an Ron effigy burning with hatred. Sorry Ron, you were actually the perfect last Mormon boyfriend.
Posted by Unknown at 10:30 AM